As we are approaching the critical point of November 11th, there are deep underlying structural changes in the global financial system.

The Jesuit plan for financial crash that would then lead to a global cryptocurrency similar to Libra has collapsed.

Second, Chinese plan to launch its own competing cryptocurrency on November 11th was also scrapped:


Third, existence of powerful quantum computers was leaked by the Light forces.

All this was enough for the Jesuits to change their plans, and now they are not tying their financial crash to their global cryptocurrency, but to climate emergency:

At this point you are probably well aware that global warming is a scam and has no basis in real science:

Again, there are certain plans of the Light Forces set in motion and the Jesuit plan for the financial crash will not go as planned.

The Light Forces have plans for global financial Reset that will bring prosperity to people and I will be speaking about this plan in detail in the coming Ascension conference which will be taking place on the weekend of November 30th / December 1st in Taiwan. You are more than welcome to join us:

Our Silver Trigger activation on November 11th has a real potential to become the turning point in preparations for the positive financial Reset.

All people buying silver on November 11th will create a powerful energy grid around the planet that will send a pulse of Light into the global financial system. 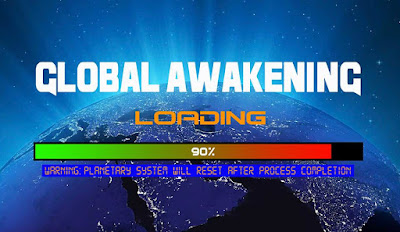 It is very important to make the actual transaction (physical or online) of buying silver on November 11th in your time zone.

To help making the Silver Trigger viral, around 100 different videos have been created in more than 30 languages.

Videos in other languages are also needed. Please send your translation text to parlagisas777@gmail.com and it will be made into a video as soon as possible.

Video with guided meditation is here in English:

Video playlists in many languages have been created by Smaly7:

And by Crack The Belief:

An excellent promotional webpage has been created for the Silver Trigger:

A promotional flyer is here:

A very good summary article about the Silver Trigger has been published here in English:

It is time to take action again! It is time to take the destiny of our world in our own hands! We all agree that the process of planetary liberation is taking too long. Here is our chance to collectively speed up the process. Therefore we are using the opportunity of the Mercury transit on November 11th to create a portal through which we will unify our consciousness and enlighten the energy of the worldwide financial system.

Scientific studies have confirmed positive effects of mass meditations and activations on human society, so each of you that will participate in this activation can actually help bringing the Breakthrough closer to us:

This activation helps the Light forces to ground the energy of Light on the surface of the planet to resolve the deadlock inside the debt-slavery financial system, finally setting humanity free. Number of people doing that activation is the single most influential factor within the power of the surface human population for speeding up the process.

We can reach the critical mass of 144,000 people doing this activation! This will create a massive healing chain reaction in the energy field worldwide.

November 11th is the yearly day of the 11:11 portal and this year it is also the day of a rare transit of Mercury across the Sun:

If you plan to observe the transit with your eyes or telescope, never look directly to the Sun, this may damage your eyesight, as it was already clearly stated at the previous transit in 2016:

Transits of Mercury across the Sun are very rare and the next one will happen in 2032. The transit of November 11th, 2019 will be the most precise alignment of Mercury and Sun in the 21st century, as Mercury will be only 76 arc seconds from the geometrical center of the Sun at the peak of the transit as seen from Earth.

Astrologically, transits of Mercury across the Sun are the best possible moments for everything related to finances.

We all know that current financial system is not fair and that it was in fact designed to enslave humanity.

Current shocks in repo market are just the tip of the iceberg signs of the underlying systemic instability of the system. The mega bank behind those shocks is JP Morgan, the bank at the very core of the global financial system:

Another structural weakness of the current system is the large amount of counterfeit US notes. If this information goes mainstream, it could undermine trust in US dollar as the global reserve currency:

Much greater threat to the current financial system are quantum supercomputers, which can easily break all encryption that protects financial data stored at the supercomputers in central banks and other financial institutions:

Quantum computers that can break all military grade encryption and could theoretically take over the current financial system are already here:

The awakened part of the human population needs a hedge against the systemic collapse of the financial system.

Therefore the Light Forces are asking everybody who feels so guided to buy as much silver as they feel guided, on the day of the Mercury transit on Monday, November 11th, 2019. It is very important that you buy your silver (physically or online) on November 11th and NOT before or after, to ensure the coherence and harmonic efficiency of our action.

Those without much money need to know that silver coins are not expensive. You can buy a single half ounce silver coin for about $12, which equals a few coffees at Starbucks.

Those who feel guided can buy enough silver to finance them for about 1-2 weeks (the expected time of reboot after the systemic financial collapse).

Those who would like to invest can buy more silver, as silver is an undervalued asset and the price is likely to rise:

Large investors reading this blog who would like to participate need to buy physical silver which needs to be stored at their own location, NOT paper silver such as ETF or ETN.

You can buy silver as coins or bars at your local dealer, online, on ebay or in a bank: 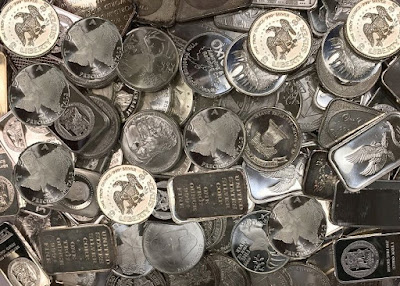 If the critical mass of 144,000 people buy silver on November 11th, this will create the needed trigger to globally expose the manipulation of silver and gold prices by JP Morgan:

In the mid 1970s, Hunt brothers almost dominated silver market for a few years against the global Cabal:

If a few brothers can do that, can you imagine what our collective power is!

If this knowledge goes into mainstream global consciousness, it will create some of the needed conditions for the global financial Reset that will set the foundations of the new fair financial system.

Esoterically speaking, silver is the metal that connects us to abundance and to the Goddess energy:

Energetically speaking, buying silver will be a symbolic act of bringing abundance into your life.

We will be also doing a mass meditation which will energetically support our physical action of buying silver.

The purpose of our meditation is to anchor as much Light as possible in the global financial system to ease and harmonize the transition.

2. State your intent to use this meditation as a tool to bring the Light to the global financial system.

3. Visualize a pillar of brilliant white Light emanating from the Cosmic Central Sun, then being distributed to Central Suns of all galaxies in this universe. Then visualize this light entering through the Galactic Central Sun, then going through our Galaxy, then entering our Solar System and going through all beings of Light inside our Solar System and then through all beings on planet Earth and also through your body to the center of the Earth.

4. Visualize this Light transmuting all remaining darkness of the current financial system, healing all inequalities, erasing all poverty and bringing abundance to all humanity. Visualize a new grand cosmic cycle beginning, bringing pure Light, Love and Happiness to all beings on Earth.
Suggested time for our meditation is 20 minutes.

Updates about the Silver Trigger:

Meditation for Peace in Syria

The next few days will be crucial to determine how the situation about the Turkish invasion in northern Syria will unfold.

The Light Forces are asking everybody that feels guided to meditate for peace in Syria as frequently as possible.

Goddess wants peace and peace it will be!
Posted by Cobra at 10:14 AM 30 comments:

VTXC grid collapse
Posted by Cobra at 5:07 AM 70 comments: