Age of Aquarius activation videos have been created in 44 languages. Make them viral, spread them through your networks to assist in reaching the critical mass! 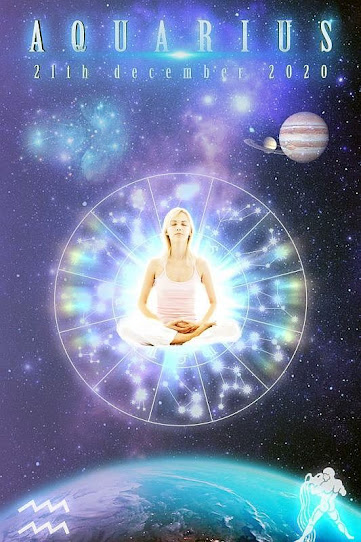 Guided audio meditation videos have been created in English:

Anime videos have been created in Japanese:

A new Cobra interview will also be created soon, and you can send your questions to welovemassmeditation@gmail.com . Many of those questions will be answered in the interview.

It is time to take action again! It is time to take the destiny of our world in our own hands! We all agree that the process of planetary liberation is taking too long. Here is our chance to collectively speed up the process. Therefore we are using the opportunity of the powerful Jupiter Saturn great conjunction on December 21st to create a portal through which we will unify our consciousness and trigger the process that will lead us into the Age of Aquarius. 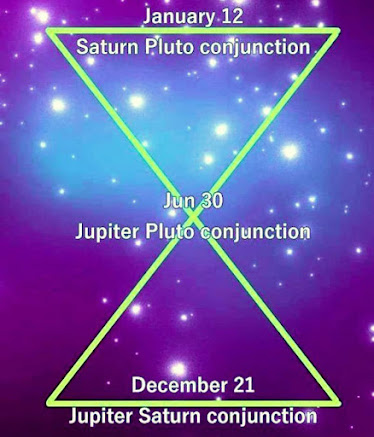 The purpose of the whole 2020 Age of Aquarius timeline stargate is to stabilize the Age of Aquarius positive timeline for the planet. During 2020, the dark forces have tried their hardest to prevent the positive Ascension timeline from manifesting. Now it is our collective chance for the positive Ascension timeline to be anchored, secured and stabilized forever, and to ensure that the rest of the planetary liberation process occurs smoothly and rapidly.

Pluto Eris square is the energy of the warrior goddess fighting against establishment. Total Solar eclipse on December 14th will display a mutable cross of Sun, Moon and Mercury conjunct, squaring Neptune, squaring Lunar node, squaring Vesta. This energy will bring rapid disillusionment in many areas for the surface population. Saturn and Jupiter entering Aquarius will start bringing much needed Aquarian energy to the surface of the planet, with at least one of major planets or asteroids staying in Aquarius from then on, until the year 2043. 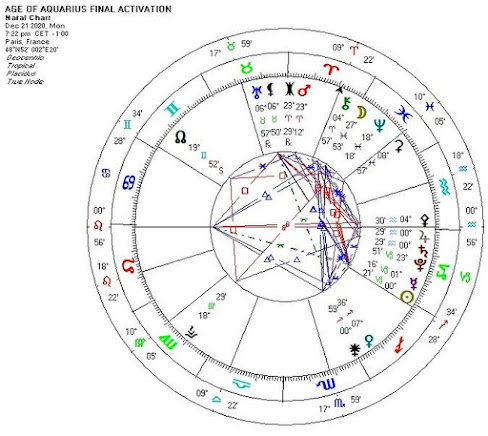 The great Jupiter Saturn conjunction on December 21st is the first great conjunction in Aquarius since 1405, and it is happening exactly on the day of the winter solstice. This is the moment when the first long awaited energies of the Age of Aquarius will finally begin flowing in:

It is the closest great conjunction since 1623, Jupiter and Saturn will be so close together that you will almost see them as a single star. In the eyepiece of a telescope you will be able to see both planets very close together, their many moons almost apparently touching: 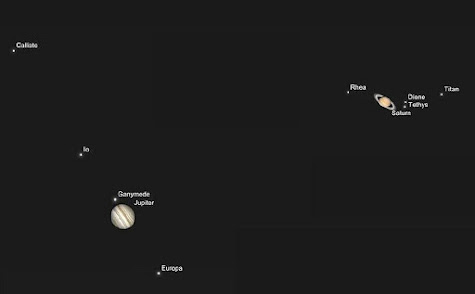 Jupiter and Saturn at 0 degrees 29 minutes Aquarius will make an exact grand trine with Alcyone (our local central sun in the Pleiades) at 0 degrees 17 minutes Gemini, and M87 galaxy (a major galaxy in the Virgo cluster, as source of galactic love for this sector of the universe) at 1 degrees 13 minutes Libra. This grand trine will bring extremely powerful energies of cosmic love to the planet and this will be the trigger that will begin the Age of Aquarius new cycle. The flash of cosmic love energies will originate from the M87 galaxy in Virgo supercluster and it will be much more powerful than the flash which reached the Earth from M87 during the AION portal activation: 5. Visualize this Light transmuting all remaining darkness on Earth, healing all inequalities, erasing all poverty and bringing abundance to all humanity. Visualize soft pink Light of the Goddess embracing all beings on planet Earth and healing their emotional bodies. Visualize a new grand cosmic cycle of the Age of Aquarius beginning, bringing pure Light, Love and Happiness to all beings on Earth. Visualize your perfect life in the new Age of Aquarius.