I would like to bring to your attention the following astrological configuration happening tomorrow: 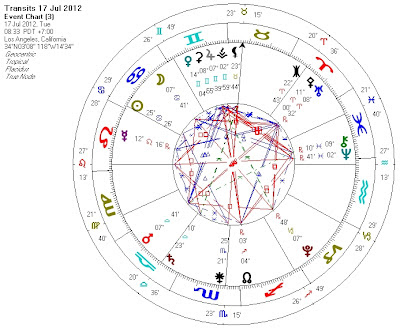 It is a cardinal grand cross involving Pluto, Uranus, Mars and the Moon. It is one of the most tense, violent, explosive and rigid configurations possible, yet holding a potential seed for a big breakthrough. This configuration will be effective to the end of this week. People are tired of waiting for the Positive Military and want to take matters in their own hands. It is a moment when the Archons would like to trick the population into a violent revolution.

Therefore I would suggest everybody to remain calm and peaceful. Violence will not overthrow the Cabal. It is strategically unwise to attack the enemy where he is the strongest. Instead I would propose the people inside the freedom movement to co-create a grassroots master plan. You might want to take a look at this:

The best immediate strategy would be to expose the Cabal and release lists with names of people and their past crimes to humanity. The surveillance videos and massive evidence that David Wilcock is speaking about would be most welcome at this point. And Assange could also leak something.

I am sure you already know of the latest Drake’s show that was abruptly ended by the Cabal:

People are asking me what to do about it. You are sovereign beings and you will make your own choices. I will report the events as they unfold and will give some background intel when appropriate.

People are also asking the Resistance to intervene now directly in the situation on this planet. The Resistance is aware of the suffering of humanity and cries for help and will respond, but the extent and shape of their operations remain classified for now.